It was October 2015. I’d been wanting to fly into Evans Head for a while. It’s a small beach resort where our friends Anne and Harpur had a beach house and it has a great little airport on the town’s outskirts that was a major RAAF base during WWII. They have a very interesting museum that contains among other things an F1-11 that used to be based at Amberley. So I organised a training flight down there with instructor Adam Starr in a Flight One Cirrus SR20. It was great weather again and we flew down through the Gold Coast controlled airspace (CTA). We’d intended to fly over the top of the Gold Coast airport but there was some military activity so we were routed at 1,500ft around the western edge of the Gold Coast just to the east of the hinterland hills. We spotted a couple of F18 jets flying up the coast as we headed south.

After leaving the controlled air space we continued on over the border into New South Wales and past Byron Bay and eventually to Evans Head. It was about 45 minutes flying time from Archerfield. Evans Head is located just to the north of an RAAF training area and there is controlled air space above the airport itself so it meant descending to 1,000ft to stay under the CTA. We noted that the smoke from a sugar refinery was blowing to the south so knew we’d have to land towards the north. This was not the best as it meant doing a tight turn to avoid the CTA to the south but it was still ok. On short final we noticed a few kangaroos!! on the runway. Luckily they cleared off so we didn’t have to go around. We pulled up at the parking area and paid the $7.25 landing fee in the honesty box (you have to love these country airfields).

After a short break we headed west and flew over to Cherrabah Station out towards Stanthorpe. There was a bit of puffy cumulus cloud around and as Adam knew I was planning to do my private instrument rating he said “how about we upgrade to IFR and fly through the cloud rather than around it?” “Can we do that?” I asked. “Sure, we just have to request it from ATC”. So he got on the radio and soon we were upgraded to IFR and began climbing to 7,000 ft through the clouds. It was amazing as we burst out of a cloud and had the vista of the rolling green hills and cumulus clouds in front of us. A bit of autopilot training followed as we headed  in and out of the clouds back to Archerfield. 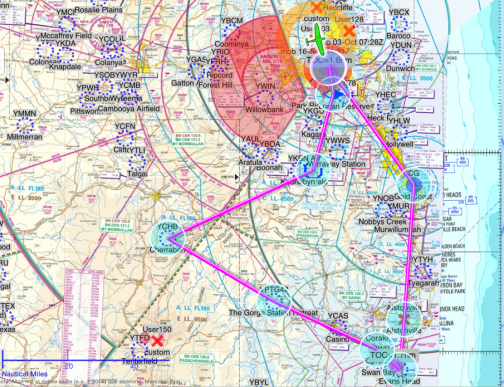