In November 2015, having passed the instrument flying exam, I thought it was time to test my new found knowledge on Navaids while building up some more experience on the Cessna 182. One of the navigational aids used is the VOR (VHF Omnidirectional Radar). It allows you to fly along a radial towards and away from a beacon located at some particular location (usually high up on a hill). This allows you to follow a particular track very precisely. Important if you’re flying in cloud. Another is the GPS unit, which allows you to put in a flight plan with various way points before departure and follow them as you go. I waited for a day with not too much cloud (not ready to fly in cloud just yet) and asked a friend along to provide some moral support. 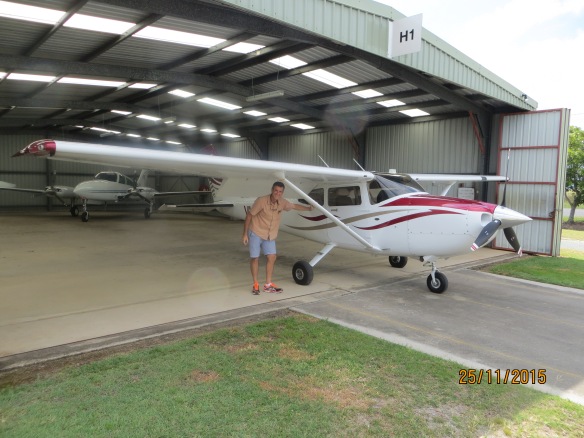 We headed off in the “ROC”, one of the better equipped 182s at the aero club, tracking the coast from Redcliffe over Beachmere to Bribie Island.

Meanwhile I tuned in the VOR to the Maleny beacon, identified that it was the right aid by listening to the morse code signal it was transmitting, then tracked to Maleny using the instruments to guide us. We passed over the Glasshouse Mountains on the way.

We successfully found our way to the Maleny beacon and flew right over the top, then headed out on a different radial to the north, tracking for Maryborough. We had the GPS on the screen as a backup, confirming that we were on track. Now one of the things we have to avoid up around that area is the Wide Bay military training area so it was very useful being able to track well clear of it using the VOR. We arrived over Maryborough bang on time and then headed east for Fraser Island.

There was no VOR at Maryborough so we used the GPS to check we were on track. We crossed the channel and passed over Lake McKenzie before heading south along the east coast of the island. 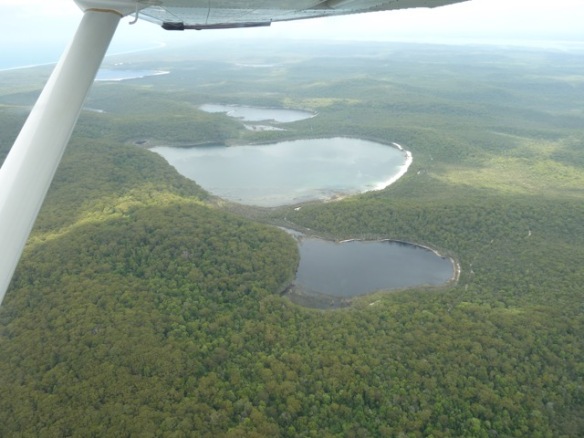 It was a smooth flying day and no other traffic nearby so very pleasant. At the southern end of Fraser we passed over Rainbow Beach and to the west of Double Island Point.

We then tracked back on a third radial to the Maleny VOR before heading back to Redcliffe via the Glass House Mountains and Caboolture. It was just over 2 hours in all and a great flight. To make things even better the wind was straight down the runway on landing so managed a very smooth touchdown.