In February 2018 we had another club flyaway to Hervey Bay. Sigi and I did the same trip two years previously in a 172 on a very windy day

(= turbulence!). This time it was in MSF, Mike Cahill’s Cirrus, and the weather was much better. Sigi decided she wouldn’t go this time as she’s been to Hervey Bay quite a few times already, so Harpur joined us in the capacity of official photographer. Mike took Bryan Galvin, so we had a full complement. It was a good opportunity to fly the plane with max take off weight. 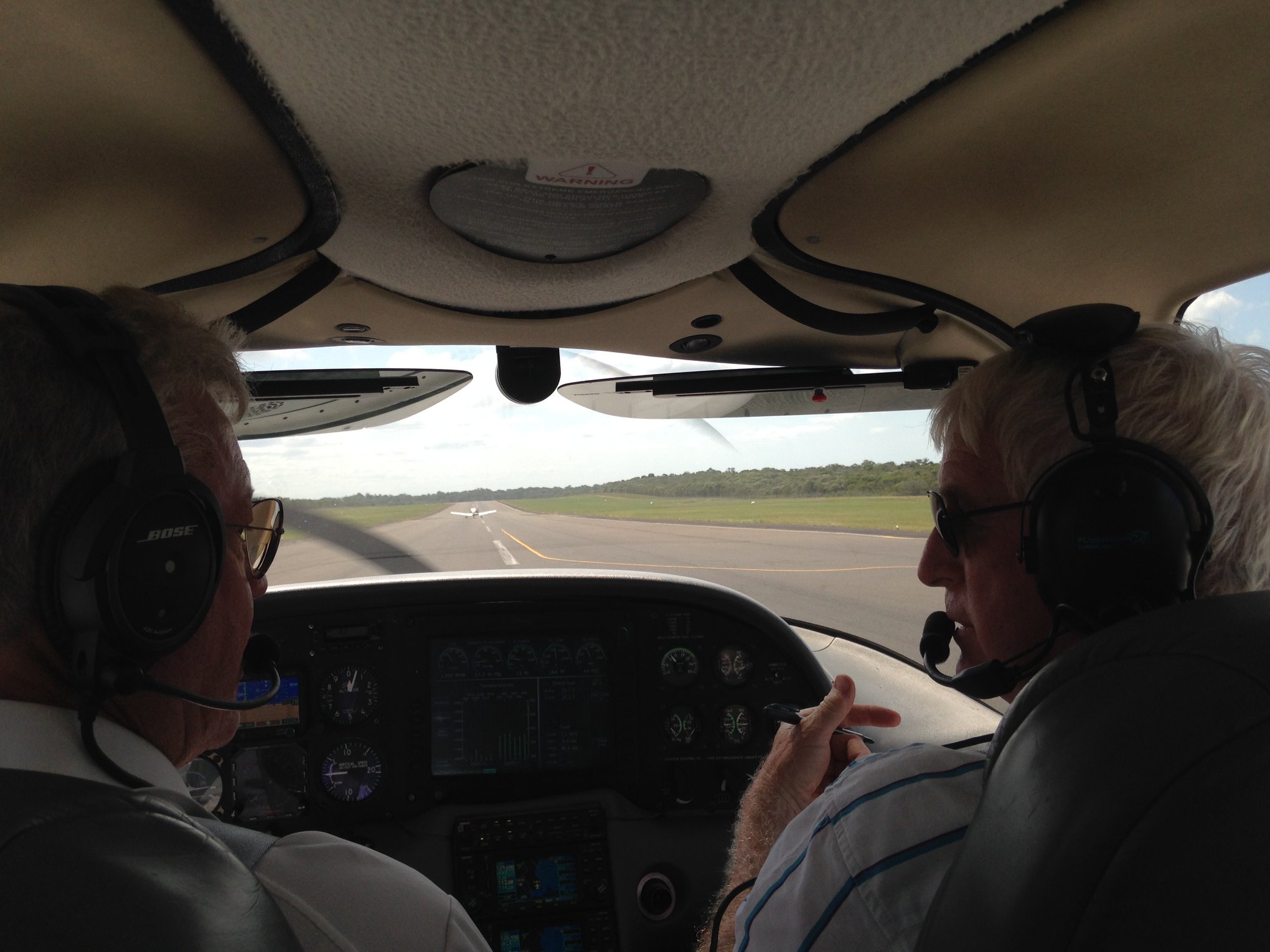 Bryan and Mike wait as Sam takes off ahead of us

This is an advantage of MSF over the ROC. You can fit four adults plus fuel plus baggage and fly a reasonable distance. I flew the outward leg, IFR, with Mike co-pilot. We climbed to 8000ft and passed over Sunshine Coast airport then flew direct to Hervey Bay, passing through a bit of cloud on the way. Good IMC experience! I used the time to become more familiar with the avionics in the aircraft, making the most of the autopilot and GPS.

There were about 6 club aircraft all arriving about the same time as well as local traffic so we had to arrange our slots so that we didn’t conflict. We worked together using the radios to increase our situational awareness as we descended from 30 miles out. The wind was from the south east so I passed overhead at about 3000ft, did a right turn and joined downwind. After a smooth touchdown I taxied to the GA parking area which our group had pretty much filled to capacity. A couple of maxi taxis took us into town where we had lunch at one of the cafes along on the esplanade.

For the return trip Mike decided to fly VFR at 1500 ft along the coast with Bryan as co-pilot. I was able to experience the comfort of the rear seat next to Harpur. We waited for a Virgin jet to land, then taxied back up the runway following Sam in his Piper.

Waiting for the Virgin flight to land

After waiting for him to depart we took off and flew across Wide Bay to Fraser Island, over Kingfisher Resort and Lake McKenzie then down the east coast to Rainbow Beach.

As we passed over Double Island Point we were amazed at the number of cars on the beach, even if it was a Saturday.

Cars on the beach at Double Island Point

At 170 knots it wasn’t long before we were over Noosa and tracked through the Sunshine Coast Airport airspace.

and From there we tracked down the coast to Caloundra, where a skydiving plane dropped a load just before we arrived.

They remained over land and we remained over water until we reached Bribie Island where Mike headed straight for Redcliffe via Beachmere.